Ghosts of Christmas Past

How will you be remembered? 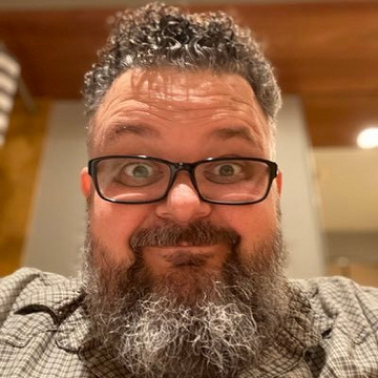 On Christmas eve we celebrated the holiday with my side of the family with a potluck, white elephant gift exchange, decorations, and lots of family. Christmas has always been a time when my Mom went all-in to make sure the kids in her orbit had a good time. It was sometimes a point of contention between her and my Dad who didn’t understand the need to go over the top every year, especially with seven children between them. Dad passed in January of 2020 and Mom moved “home” from Florida this past July  to Wisconsin where she lived most of her life and where the rest of the family resides.

In the past, our childhood home was the epicenter of Christmas Day for the family. Even as the kids got older and started having children of their own we assembled at my parent’s house at 7am on Christmas. In fact, the youngest of us apologized this morning after being gifted a child of her own that woke her up at 5am to open presents.

As you can imagine, with a house full of people who arrived bleary-eyed, then anticipatory, and then excitedly opening gifts picked their heads up out of the haze of the holiday. The next question was “What’s for breakfast?” Dad would typically jump into the kitchen and make breakfast happen. Initially, that came in the form of a large bowl of pancake batter and an assembly line cranking out short stacks of pancakes and a mess of scrambled eggs. Later on Dad, growing older and wiser, started making pans of egg bakes the day before, and eventually getting whomever was around to help make them  ahead of time.

While struggling to make up my mind about what to make for the potluck my sister suggested bringing an egg bake. After giving it a moment it made sense even given we were getting together in the afternoon for ham sandwiches. It was easy enough, and  one could choose to put the egg bake on a bun with some ham. Knowing there are some picky eaters and some foodies I made an Egg & Cheese Bake and a Sausage, Red Bell Pepper, Onion and Mozzarella Egg Bake. Just like Dad used to make? No. But, close enough that even the youngest who were around made the association and appreciated the sentiment. 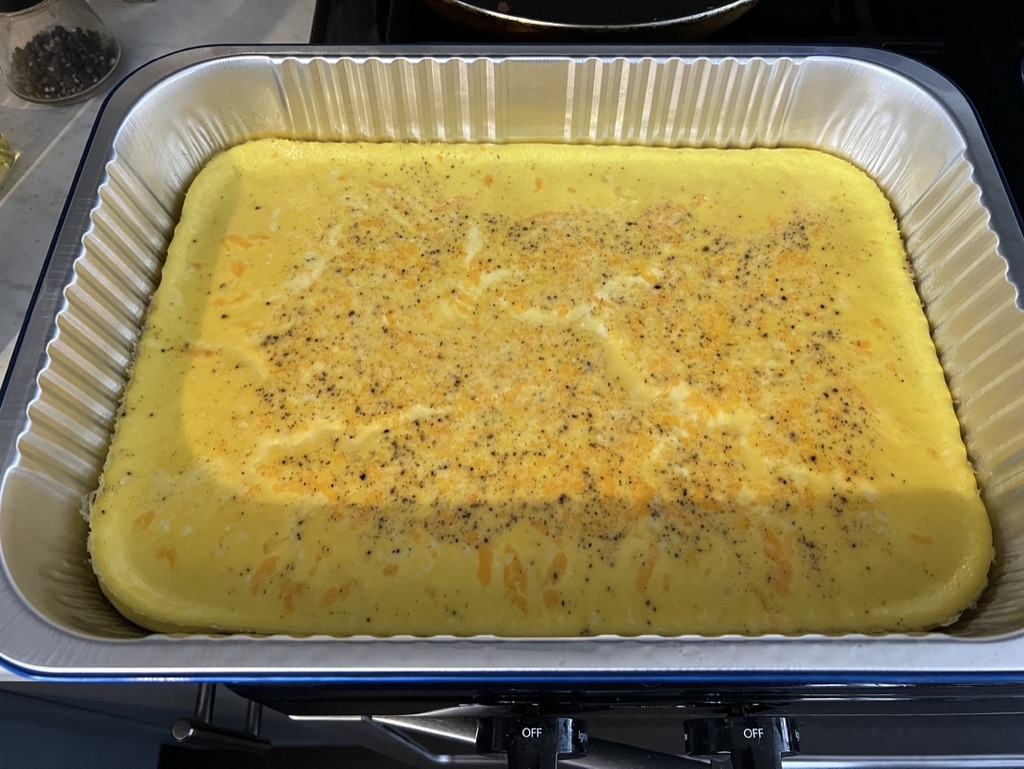 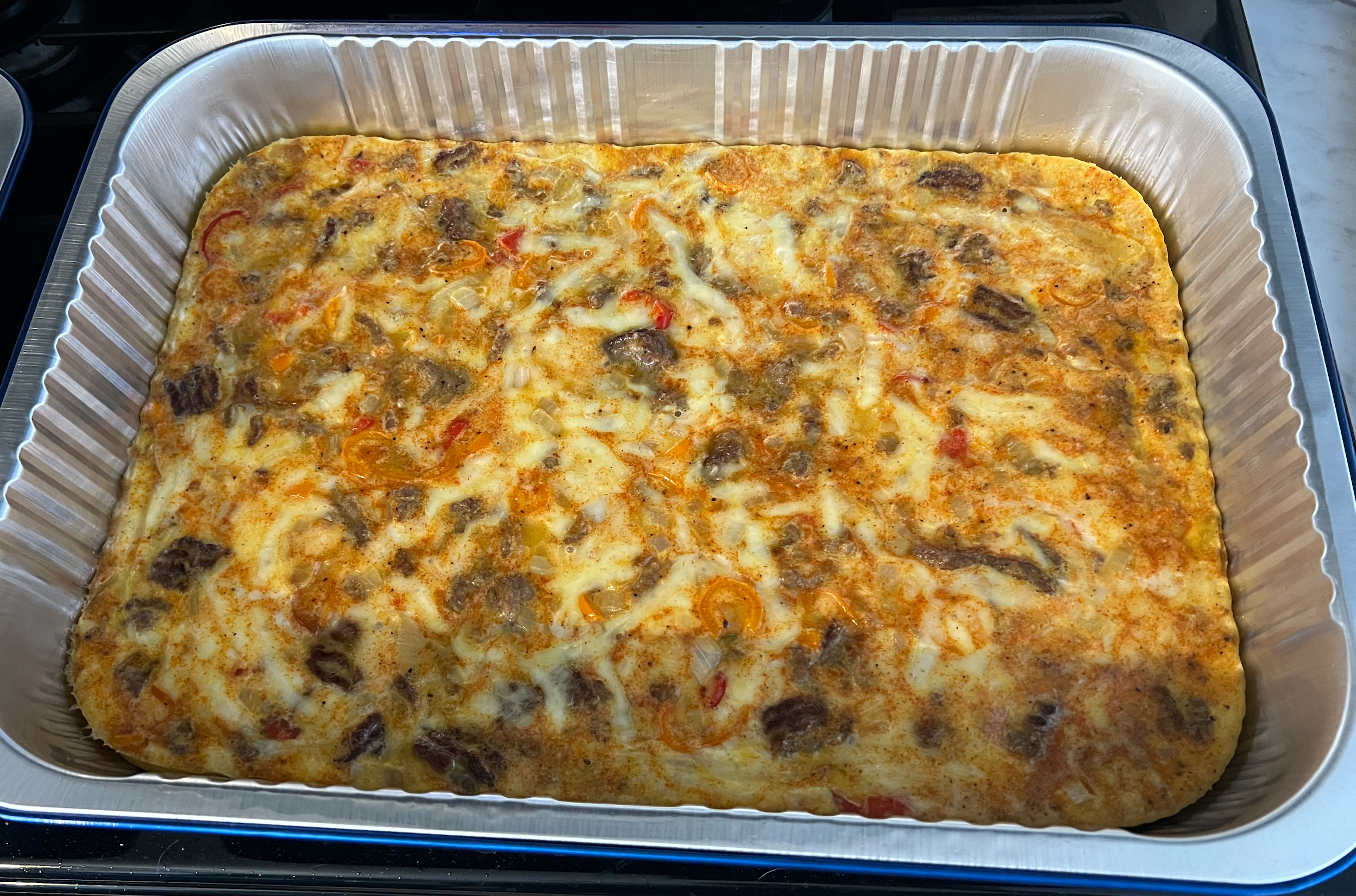 After lunch and some more cards and holiday songs played over the room my niece approached several folks asking if she could organize the White Elephant Gift Exchange. Our theme was Thrift Store Finds and we set a per item limit of $25 or less.

After getting a thumbs up from everyone she selected one suit from a deck of cards and the high card won the opportunity to select first. Which if you’re not familiar puts you in the weakest position as anyone who selects a gift has the opportunity to steal your gift and force you to select anew from the pile of unopened gifts or steal something that had not been stolen from you.

For my part I bought a Nordicware Bundt cake pan from a local thrift store shaped like a Chrysanthemum, often referred to as Mums. We baked the Carrot Cake recipe Dad had worked to perfect after having an unsatisfying experience with a slice at a restaurant. OK, we actually baked three of those cakes before we got it right. 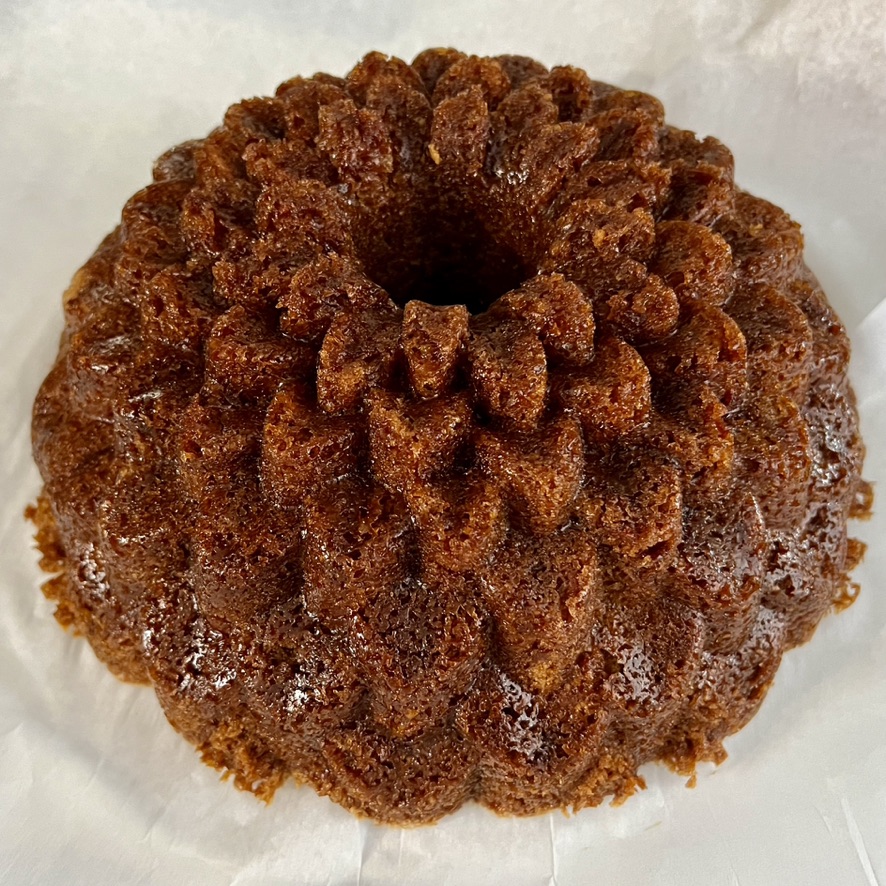 At first I forgot the oil, d’oh, and the result was a very dense muffin-like affair! The second we had to try a slice to make sure it turned out. We also, thankfully, used this as a test palette for decoration because our first attempt was rough. Finally, the third time was the charm and while it would certainly have gotten us voted off a British baking show it turned out more than OK for a nostalgic way to include more family legacy in our Christmas. 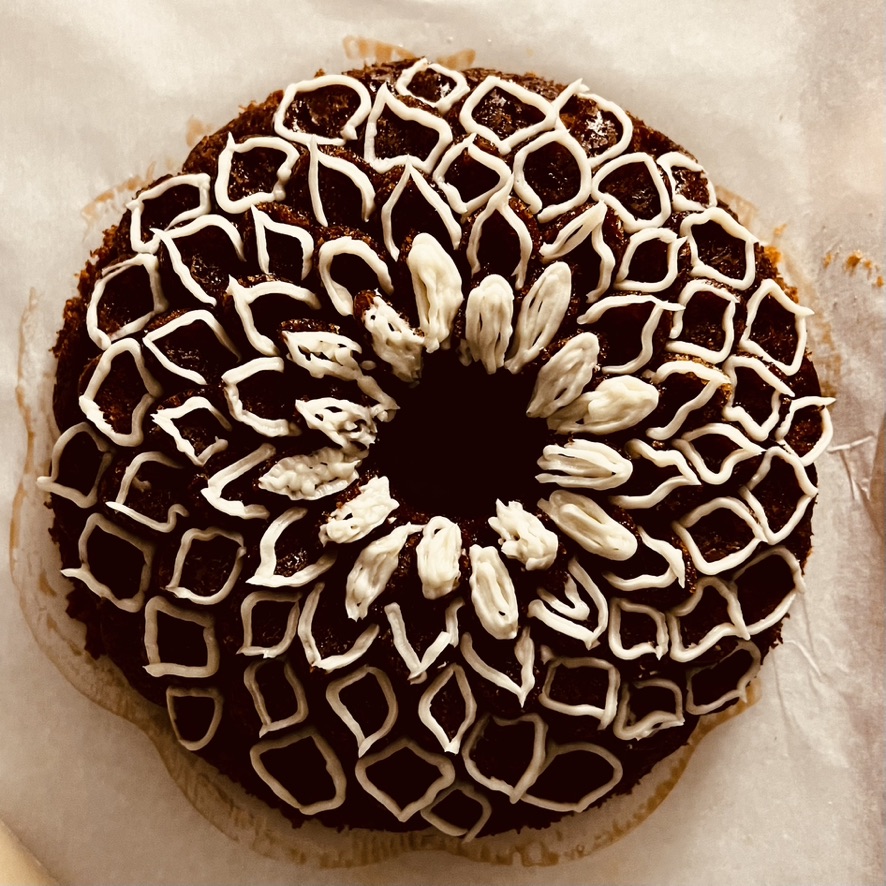 As a child my parents were great at addressing needs, perhaps even anticipating them, mastered including folks in the process, and leaving behind a documented recipe to allow for future success, especially after they were no longer involved.

If you’re looking for a team to help you discover the right thing to build and help you build it, get in touch.